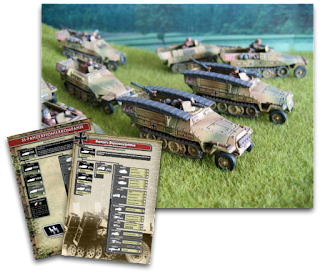 Some time ago I decided to collect and play Gepanzerte Panzerpioniers, and I still want to remain faithful to that. Panzerpioniers were really strong in FOW V2, but in V3 their strength was limited a little bit. I'm still working on models, but it is time to also think about the order of battle.
I have some experience with SS-Panzergrenadiers. I was able to prepare a well-balanced order of battle that enabled me to face nearly all opponents with high chances of winning or ending with tie.
Unfortunately, I start to realize that with Gepanzerte Panzerpioniers it will be really difficult to find a good roster. First of all, I know only two briefings for Gepanzerte Panzerpioniers, and only one for SS is in Earth & Steel. They usually get a limited number of supporting options - especially in SS briefings. They are also expensive as hell - especially SS, which is of course a typical for elite forces. A little bit better situation is with Heer Panzerpioniers briefing available at BF site. However, I have lots of SS-infantry stands, and nearly no Heer stands, so I would have to paint too much infantry to field them right now.

To sum it up. I'm looking for a universal Gepanzerte Panzerpionier order of battle that is capable of fighting with all type of forces with a chance of winning - I don't like to prepare for any particular kind of opponents.

I have doubts about the rosters I considered. Maybe you will be able to help me? Maybe you know other books where can I find other rosters that are V3 compliant?

The other thing of course is that I have some models right now, and I would like to limit the necessity of painting new ones.

A similar roster to the previous one - the only main difference is about exchanging 4 StuGs to 2 Tigers. Which is better? To be honest I don't know. Tigers are of course solid tanks, however, they are also less predictable due to Tiger Ace Skills. Moreover, instead of four potential targets for artillery there will be only two, so they will be easier to kill by aircrafts or heavy artillery. They give also less ROF. On the other hand, they have two pros. First of all, they have thick side armor which helps in protecting from mass of advancing light tanks. The second benefit is a long range gun, that enables to stay behind the line of infantry and knock out enemy tanks.

Unfortunately, I would have to buy and paint additional Tiger to field this company (which doesn't seem to be a problem).


What do you think?