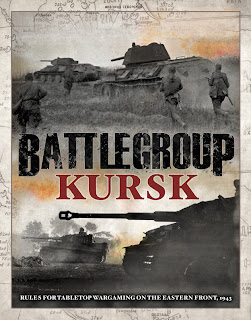 Its been a while since I have started playing Flames of War. I play the game mainly because of my love to history, strategic games and modeling (hmm, since my childhood days).
When I started, I was really impressed by FoW, mainly because it had a very comprehensive set of rules, but still keeping their complexity at a reasonable level. However, I have to admin that at the early days, some of them seemed a little bit strange for me, because I looked at them purely from the perspective of the history fan. Later, I understood that it is always a trade off between realism an playability (what is possible in computer games is not always fun on table...).
There were two things that I really appreciated in the game. Guys from Battlefront were able to create the system with very limited number of special rules - but still reasonably well corresponding to real battle conditions and specific characteristics of armies and their equipment. The second thing was the unique game balance - sometimes disputable from the historical perspective, but always fair for players. These two make it a perfect tournament game.

Unfortunately, since V3 was published things started to get worse in my opinion. New army books introduced more and more special rules. Sorry, but I don't have time to buy and read all the army books. It is really disappointing at tournament when your opponent starts to use some strange rules you don't know (even if he/she goes through them before the battle you don't have a chance to verify if the person understands the rules correctly).  Moreover, I observe a tendency borrowed from the other well-known game publisher: publish a new army book, which is more powerful than the previous ones = make people buy more staff from you... Recently published "Rising sun" disappointed me even more... Are there any Japanese units that operate according to the standard rules only?
Of course, it doesn't mean that I'm going to stop playing FoW. I just need to try something fresh and more historically-oriented. Well, it seems that together with my colleague Kondziu, we found something worth of trying. It is the Battlegroup Kursk WWII system published by PSC.

I will for sure write more about this game in forthcoming weeks. What I can say at the beginning is that the rulebook is really nice (OK there are some typos, and text could be aligned better).  The paper quality is really high, the photos are nice, but the rules are just awesome. I will just give couple of its main features and differences from FoW:
We are after an intro game. We played one day after Kondziu received his rulebook, so you can guess we missed a dozen of rules. Still, the game was really enjoyable. I really look forward to play once again :) I hope we will be able to give you a battle report then. 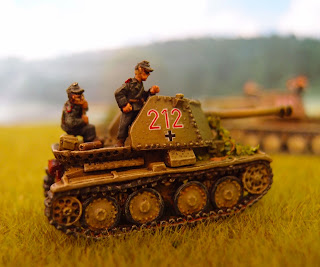 Hi everybody, I haven't been here for a while. Some time ago I decided to reconsider AT support units for my Gepanzerte Panzerpioniers. Initially, I was relying on StuGs, which I really like, but they were too expensive and didn't give enough AT punch.


After a while, I decided to go with two extremes in my roster. At one side I have a King Tiger, which role is to terrify opponent's heavies like IS-2, Tigers, Panthers, etc., and on at the other side I wanted to have something cheap, with reasonable good AT capabilities that I can use in high numbers against T-34s and Shermans. Yes, I needed a regular tank hunter. At first, I thought about Hetzers. These tiny self-propelled guns are lovely. Unfortunately, they are a terrible mistake in FOW. Little bit less expensive than StuGs, but without schurzens and with this terrible overloaded feature - how to ambush anybody from the forest if you cannot move? That's why I turned into paper-thick tank hunters like Marders. I decided to take Marders III H. They have 12 AT, which is perfect in my opinion. It easily knock out medium tanks like Shermans, T-34, but can also stand against Tigers and Panthers (of course from cover).

Generally, I think that Germans in FOW really miss a good, cheap all-around tank, e.g., Panzer IV with better gun. Their 11 AT 75mm cannons are not enough, and frontal armor at the level of 6 or 7 doesn't give a reasonable protection nowadays. If you're hit by firefly, some of the new 76mm Shermans, or T-34/85 it won't be enough to survive. It will be about passing or failing the Firepower test, so why to pay for such armor?

First insights from the field


I have used the Marders at one tournament so far, and I was very pleased with their performance. What is interesting they nearly always all survived! People underestimate them and would rather focus on your other troops, while you can easily focus on eliminating your targets of choice.


Of course the tactic you have to use is hide & hit hard. They are so cheap that you can easily try to risk and rush from the cover and try to attack more expensive tanks from side at point blank range (12 AT is too much even for King Tiger).


To sum up, I really enjoy my roster right now. I have all the things inside for 1750 games: King Tiger, 4x Marders, 3x Pumas, 2x platoons of panzer pioneers, nebelwerfers, and Ju-87D. Do you need more?


I bought Marders IIIH from Battlefront. They are quite nice models, however, they could be casted better - it is quite difficult to assemble all parts together. I decided to buy an additional set of German artillery crew to make each vehicle unique. 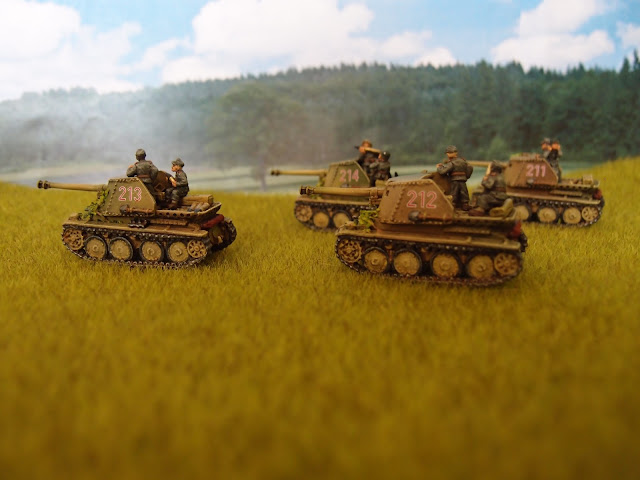 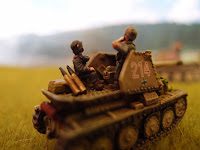 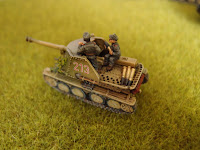 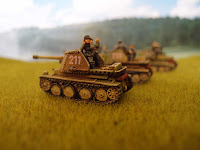 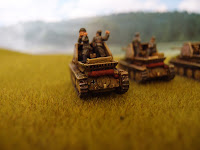 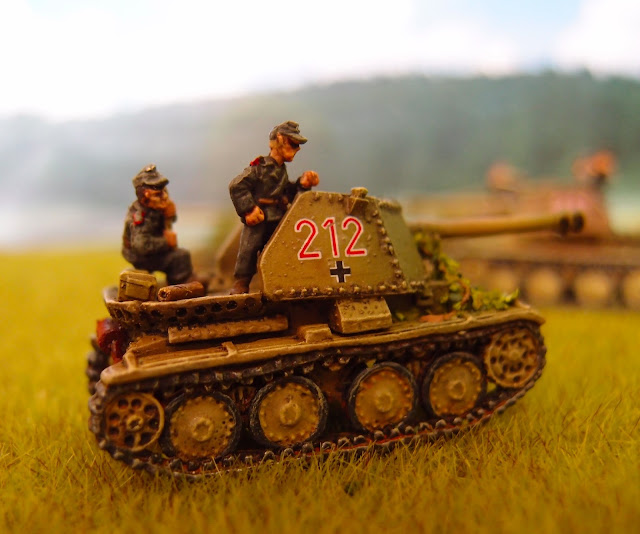 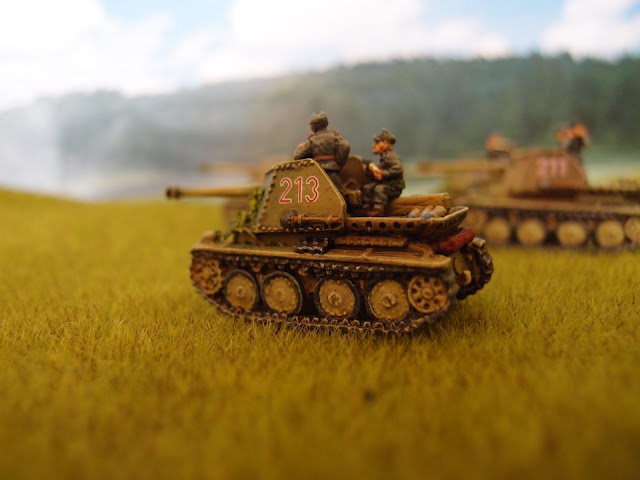 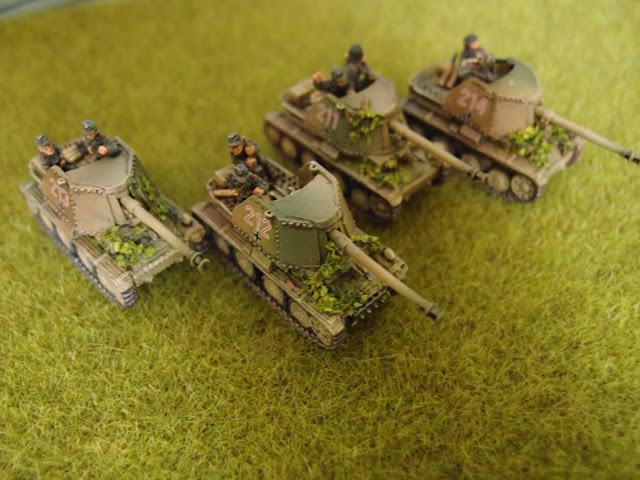 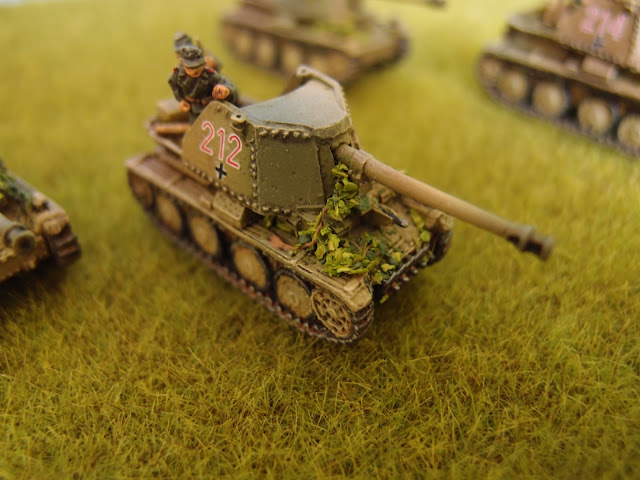