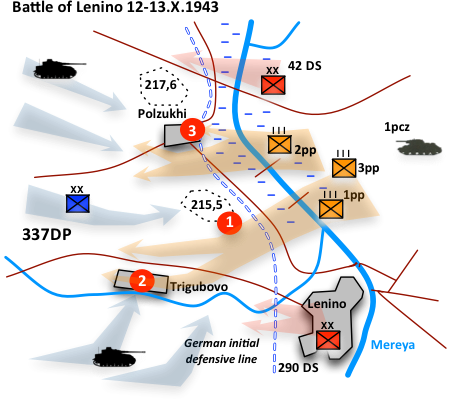 Battle of Lenino is the first battle we are going to play in our Lenino to Berlin 43-45 campaign.

The battle of Lenino was a baptism of fire for the Polish 1st Tadeusz Kościuszko Infantry Division—a newly formed People’s Army of Poland. The main fights took place between 12 and 13 October 1943. Although, for many years (during communism period in Poland) the strategic meaning of the battle was visibly overstated, it is fair to say that the battle was important from the political point of view—it purported to show the brotherhood of Polish and Soviet soldiers.

If you are interested in historical details, I recommend you reading the article at Wikipedia, whereas I will try to keep the description of the battle short. The Polish 1st Division belonged to the 33th Army, whose task was to break through the German Panther line and reach the Dnieper River. The task for the Polish division was to assault the German line between the village of Polzukhi and hill 215.5. The attack led through the valley of the Mereya river. Crossing the shallow river wasn’t a big problem in itself. The real issue was operating in the swampy valley of the river.

Two Soviet divisions – 42th and 290th, supported the Polish attack on both flanks. Unfortunately, both of them were undermanned (around 4000 personnel each).

During two days of fighting, the Poles were able to take Polzukhi and hill 215.5. However, they suffered heavy losses (25%) and were not able to continue the advance. They also inflicted heavy casualties on the German 337th infantry division.


There were many issues that affected the performance of the 1st Polish Division. I would like to point to a few of them:


The support equipment available for soldiers in the 1st Polish Division:


We decided to play three games to represent the battle. For all of them we will use the Battlegroup Kursk book.

It will somehow summarize the assault of the 1st Regiment (and 3rd Regiment on the second day). The assault started at 6:00 AM with the recon operation in the strength of Battalion (preceded by preparation by heavy artillery). The soldiers were able to cross the river and even to take the first line of German entrenchments.  However, the losses in the Battalion were heavy (50%). In fact Germans had withdrawn from the first line to avoid losses from the artillery fire. The main assault started at 10:30. The armor was not able to cross the river on time, so infantry was unsupported until the first tanks appeared on the hill at 14:30. The Poles were able to eventually secure the hill. The Germans launched a couple of counter-attacks (tanks, infantry, and heavy support from the Luftwaffe).

Scenario: Attack-Counter-Attack (page 171) – buildings in the middle, river in the South or South + West / East, road.

German forces had to withdraw from hill 215.5 into the village of Trigubovo. German commanders knew that the village is crucial for holding the defensive line. The fights to secure the village were fierce. Polish 1st Regiment was able to take the village, but it was soon counter-attacked and pushed back (Germans attacked with tanks, including the famous Ferdinand tank destroyers).  Again, Polish forces lacked tank support (which arrived late). The fights lasted till the evening and were continued at night (with the support of 16 tanks). The 1st Regiment suffered heavy losses and finally had to be joined by the remaining 3rd Regiment. Despite many assaults Poles were not able to re-secure the village.

The 2nd Regiment was ordered to assault Pozlukhi. German resistance in the village was heavy. They launched a couple of counter-attacks (with tanks, infantry and air support). Poles were able to capture the village and hold it to the end of the battle. However, in one moment of the battle, only the heavy barrage from howitzers battery saved the fate of the 2nd Regiment.

Campaign: from Lenino to Berlin 43-45

To add some flavor to our regular BGK battles we decided to look for a campaign system.

Initially, our vision was to create a complex campaign system ourselves. We thought about including things like earning / loosing points that are used reinforce your army, etc.  However, after long discussions we decided to drop the project, because we felt that there is a really thin line between something great and complete disaster. Unfortunately, creating such system requires lots of play testing = time that we don’t have right now.

Recently, we got a completely different idea. We decided to combine the pleasure of playing tabletop strategy with a little bit of historical research. The idea is to add some historical background to our battles. The theme of the campaign will be the battle route of Peoples' Army of Poland on the Eastern Front (LWP). The army entered combat in October 43 and finished the war in Berlin in 45. This will enable us to go smoothly between different Battlegroup books (Kursk, Overlord, and Fall of the Reich) and record the results of all the battles.

The rules are more than simple. We analyze the battle route of LWP, and, for each major battle, we do a little bit of research to understand:
Based on this information we will try to select a BG scenario that would best represent the battle conditions. We will also try to incorporate the information about the equipment into our rosters (we will still prepare a valid 500-point order of battle for the Battlegroup game). If the battle is a bigger one, we split it into a number of smaller encounters. We don’t want to have exact, historical scenarios, because they would involve very deep research, and at the end, it is hard to find well-balanced encounters that would be fun to play.

Finally, we will play the game; write a short report, and award a victory point to the winner.