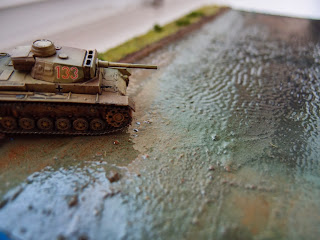 After long months of painting miniatures we decided with Kondziu to change the direction for a while, and spent some time on polishing our table dioramas.
We decided to start with a project with goal to create four river sections that will cover the short edge of the table. The decision was stimulated by the fact that one of the  Battlegroup Kursk scenarios requires river. So, my task was to create the river and Kondziu was going to prepare a wooden bridge.

Of course, I could just buy one of the in-the-box rivers, e.g., Battlefront's one, but I wanted to try something a bit different and create it myself. I also didn't like that most of the available river-dioramas have high river banks. It looks weird when you hide tank behind a river bank... and even if you agree that there is no elevation there, it still doesn't look convincing to me.

Here I would like to share with you my experience from that project. OK, I have to admit at the beginning that I hadn't had any experience in that area, so forgive me if I didn't make it according to the state of the art ;)

And one final remark. My criteria for choosing the techniques and materials were simple: cheap + fast + convincing view.

What you will need?

First, I had to collect some products that I was going to use:
Step 1. Modeling the river banks

I decided to make it really fast. First of all I got a 1mm polystyrene hips sheet and draw two dots at the end of each shorter side that will make the river width. Then I draw the lines to see the potential shape of the banks. I decided that the river was going to be 12cm wide (12 meters in 1:1 scale). Marking river width is important, because you're going to prepare each piece separately, and they have to somehow fit to each other.

Then, I used 3mm hip sheet with the foam inside to model the banks. You have to cut 1cm-wide stripes and bend them in hand to make the river bank twisted a little bit. Finally, you have to attach it to the base. 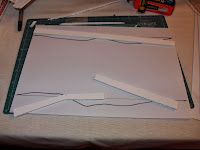 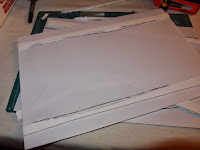 Next, I covered the whole construction with the PVA glue mixed with regular sand (of course first you have to cut the base a little bit so the PVA glue stick to it for good). 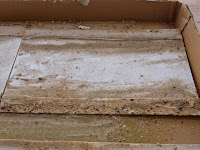 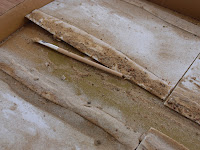 Of course you have to prime the whole thing at this stage. I bought an ordinary acrylic paint in the can (not dedicated to the model kits or wargaming). It was really cheap and if I only didn't chose a bad shade of brown (a little bit too rusty - like burnt sienna) it would be perfect. Unfortunately, because of that I had to repaint the elements to brown.

I used my airbrush to paint the bottom and the banks. Painting a realistic looking river bottom is not an easy task. I decided to start with german grey in the middle, and then choosing lighter and lighter shades of green while I was moving towards the banks. For the fords I chose dark sand and then dry brushed it with beige brown. 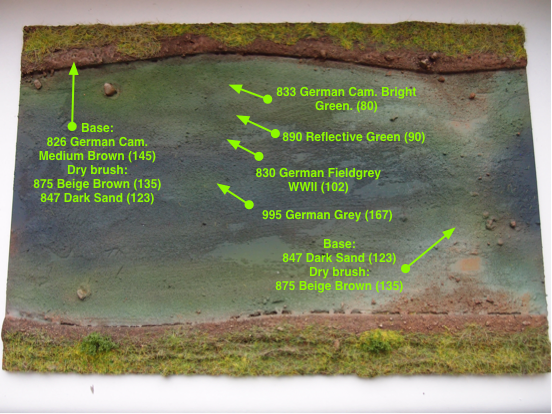 As a next step, I had to add some static grass and bushes at the river banks. I used the mixture of Gale Force 9 and Polak static grass. Nothing special about it. 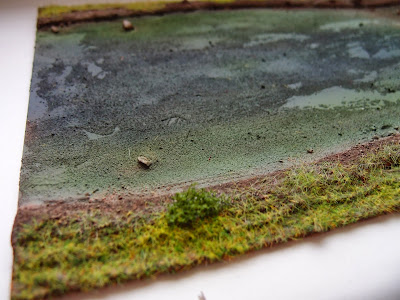 Finally, the biggest question mark - the water effect. I was really frightened about using the water effect. As I already said it was sent to me with bottle after mineral water, without any labels... Well, I decided to take the river section into my cellar and do the whole procedure there to avoid potential poisoning from this unknown substance. It turned out it worked really good, but unfortunately, I used a regular plasticine for children to protect the flow of the water. In many cases it was not enough.
After 4-5 days the water became hard. Again, I made a small mistake because I took it into my car early in the morning - there was really cold outside. As a result the water wrinkled a little bit. It wasn't a planned effect, but still it looks quite convincing... 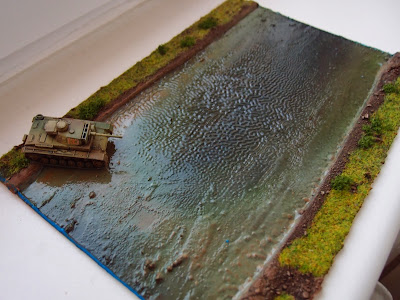 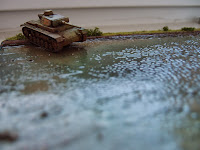 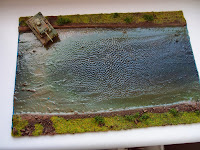