We have just finished playing the first encounter in the Battle of Lenino, which is part of our  Lenino to Berlin 43-45 campaign. 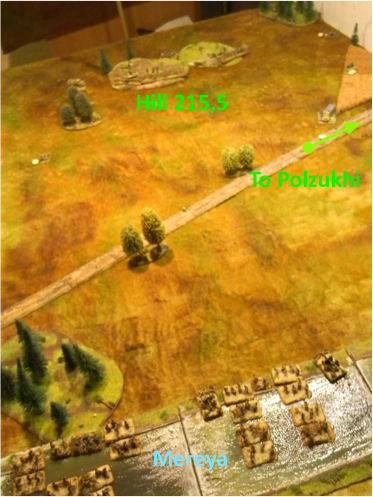 The battle represented the assault of Polish 1st Regiment (and 3rd Regiment on the second day) on hill 215,5, located between village of Polzukhi and Trigubovo.


The assault started on 12th of October at 6:00 AM with the recon operation in the strength of Battalion (it was preceded with heavy artillery preparation). The soldiers were able to cross the river and even took the first line of German entrenchments.  However, the losses in the Batalion were heavy (50%). In fact Germans had withdrawn from the first line to avoid losses from the artillery fire. The main assault started at 10:30. Unfortunately, the tanks were not able to cross the river on time to support infantry. The first tanks appeared on the hill at 14:30. Poles were able to finally secure the hill. The Germans launched couple counter-attacks (tanks, infantry and with the heavy support of Luftwaffe).


We decided to play it as High Ground scenario (Battlegroup Kursk - page 175). The table corresponded quite well to the actual terrain. It definitely didn't offer too much cover for the attacker.

Our rosters were also quite historical, however, we were not able to find detailed information about the equipment of German 337 Infantry Division. What we know is that the infantry was supported by the tanks and Ferdinand tank destroyers. 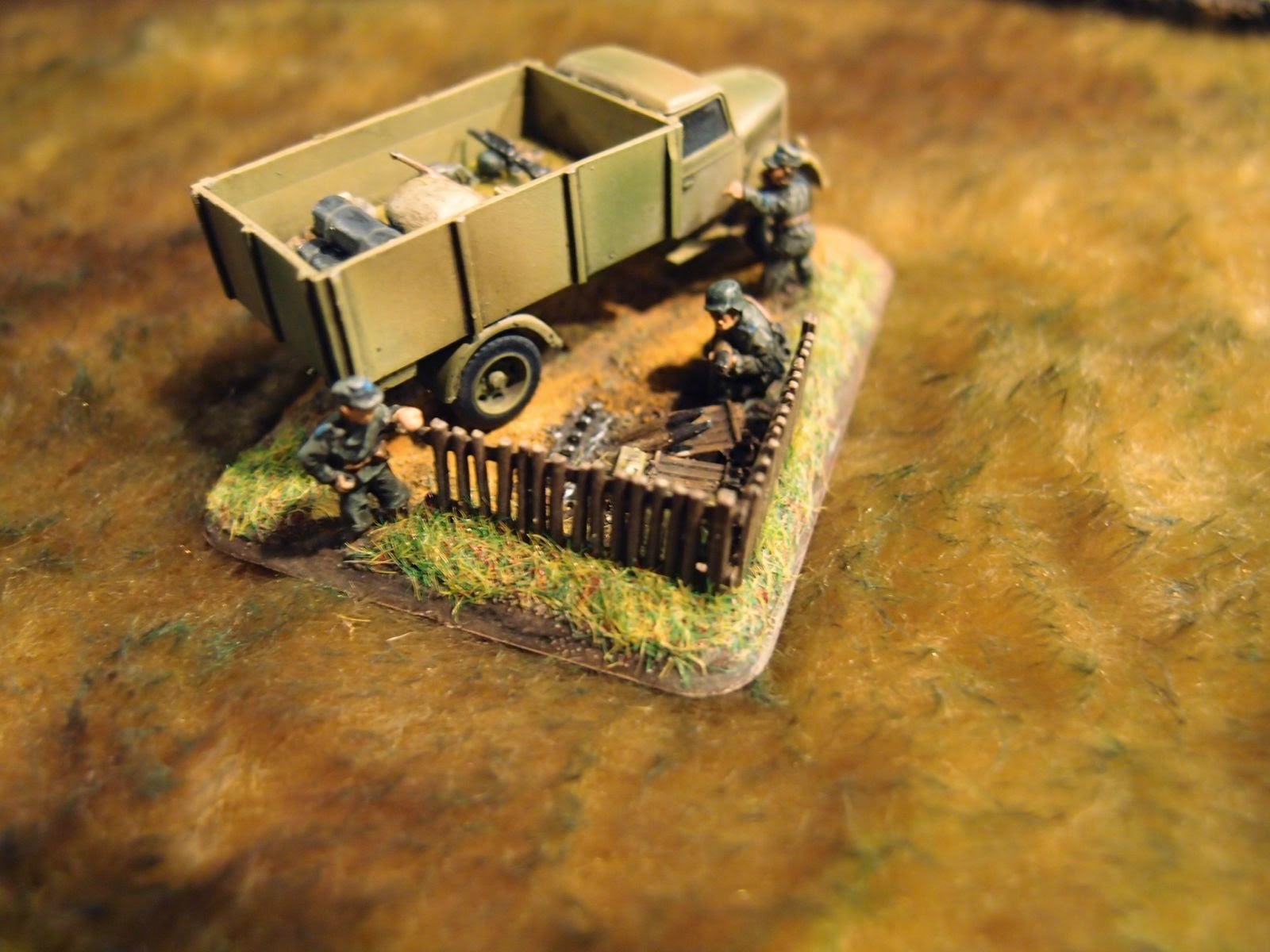 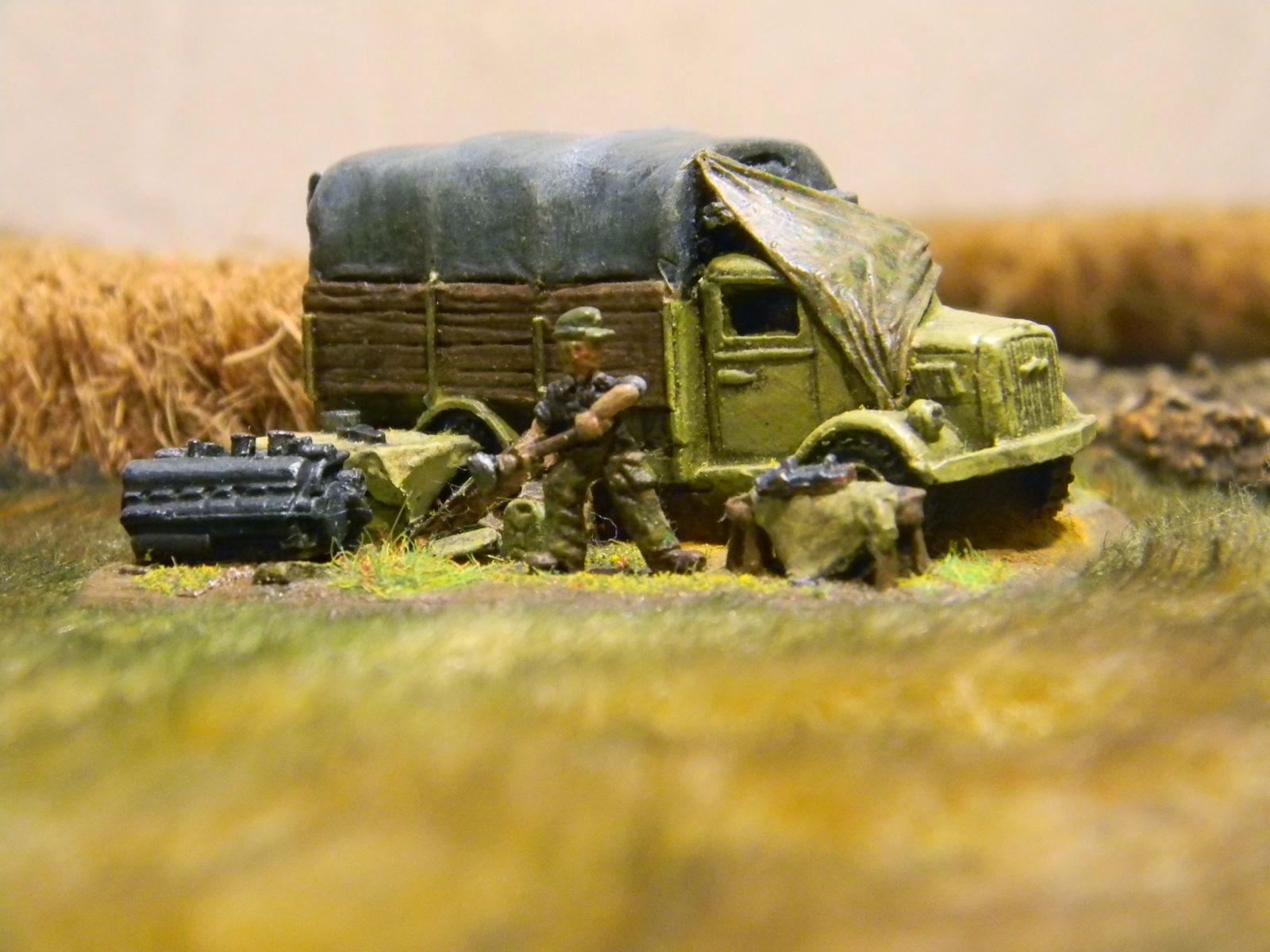 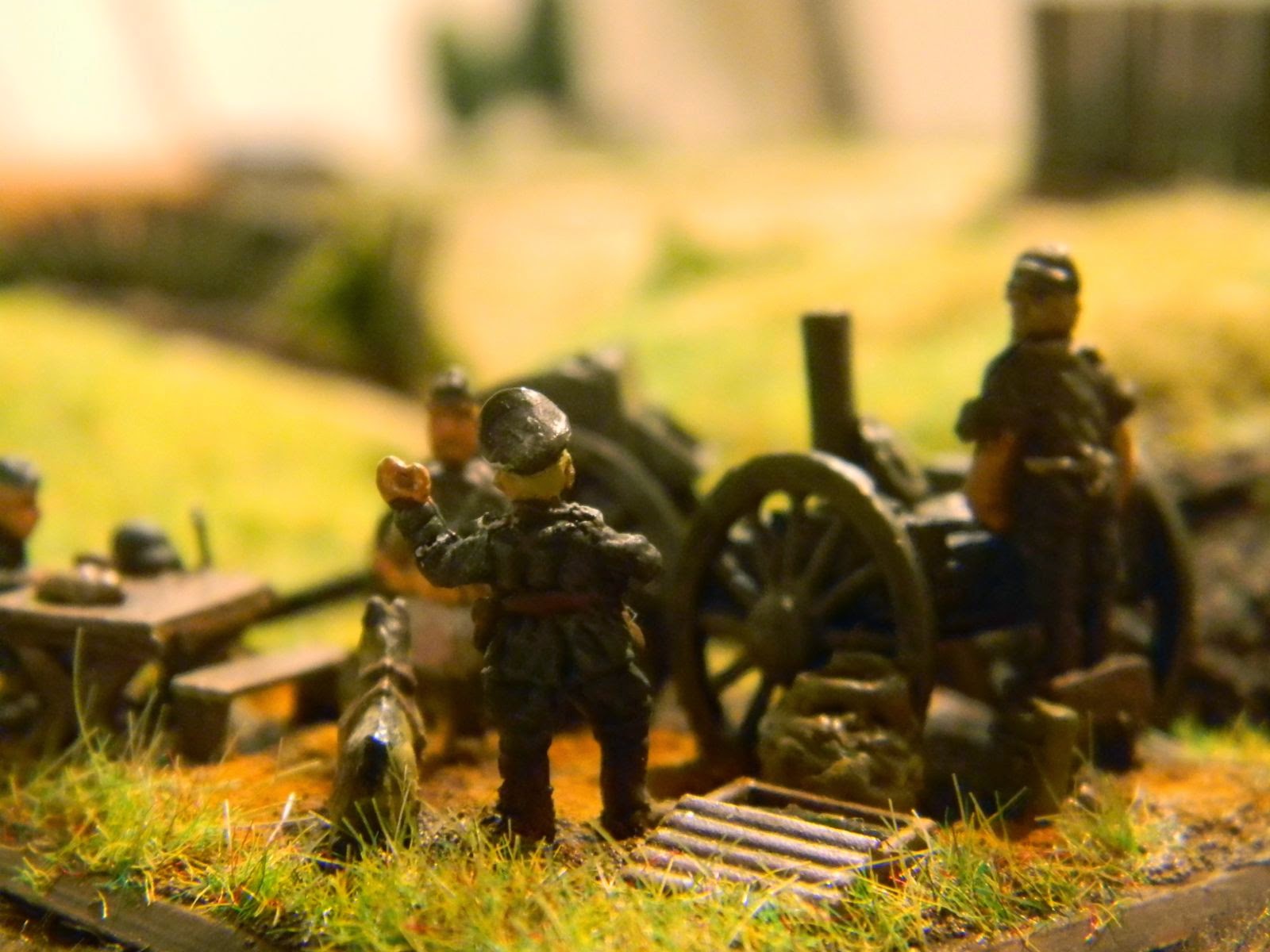 Three objectives: Two nearby hill 215.5 and one near the crops field (road to Polzukhi).

Mirek: the backbone of my 500-point roster (Infantry Group) was a grenadier platoon, reinforced with one additional squad. I had two recon units: sniper and SdKfz 222 armored car. The scenario allowed me to take three additional defenses for free: one minefield, MG bunker and a single line of trenches. In addition I decided to reinforce my defense line with additional trenchline and minefield. The infantry platoon was supported by the platoon of StuGs and StuH 42F assault gun (+armored ammo carrier). Finally, I added an off-table battery of 80mm mortars, one counter-battery fire mission and JU-87 airstrike.  I think that my army group represented the defenders and counter-attackers quite well (I tried to find a common denominator of all fightings that took place near the hill 215,5 within two days of the battle).

Deployment: I placed the trenches at the top of the hill and nominated couple of infantry squads to defend my positions there. I perceived my left flank as vulnerable to potential attack. There was a crops field that could give nice cover to the hordes of attackers I expected (Kondziu placed his objective there). I mitigated the threat by laying down two minefields and protecting the flank with the MG bunker and one additional MG team. 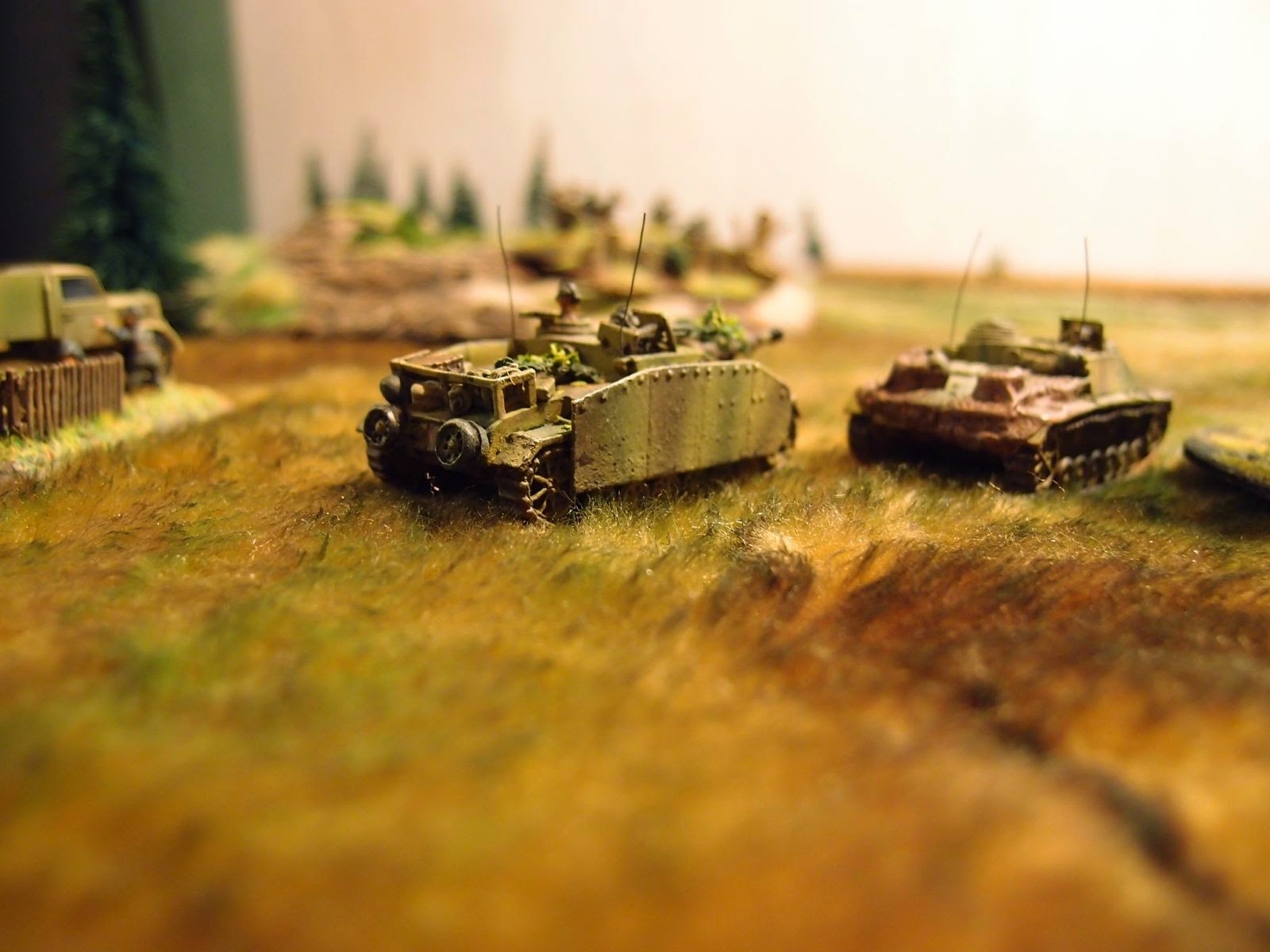 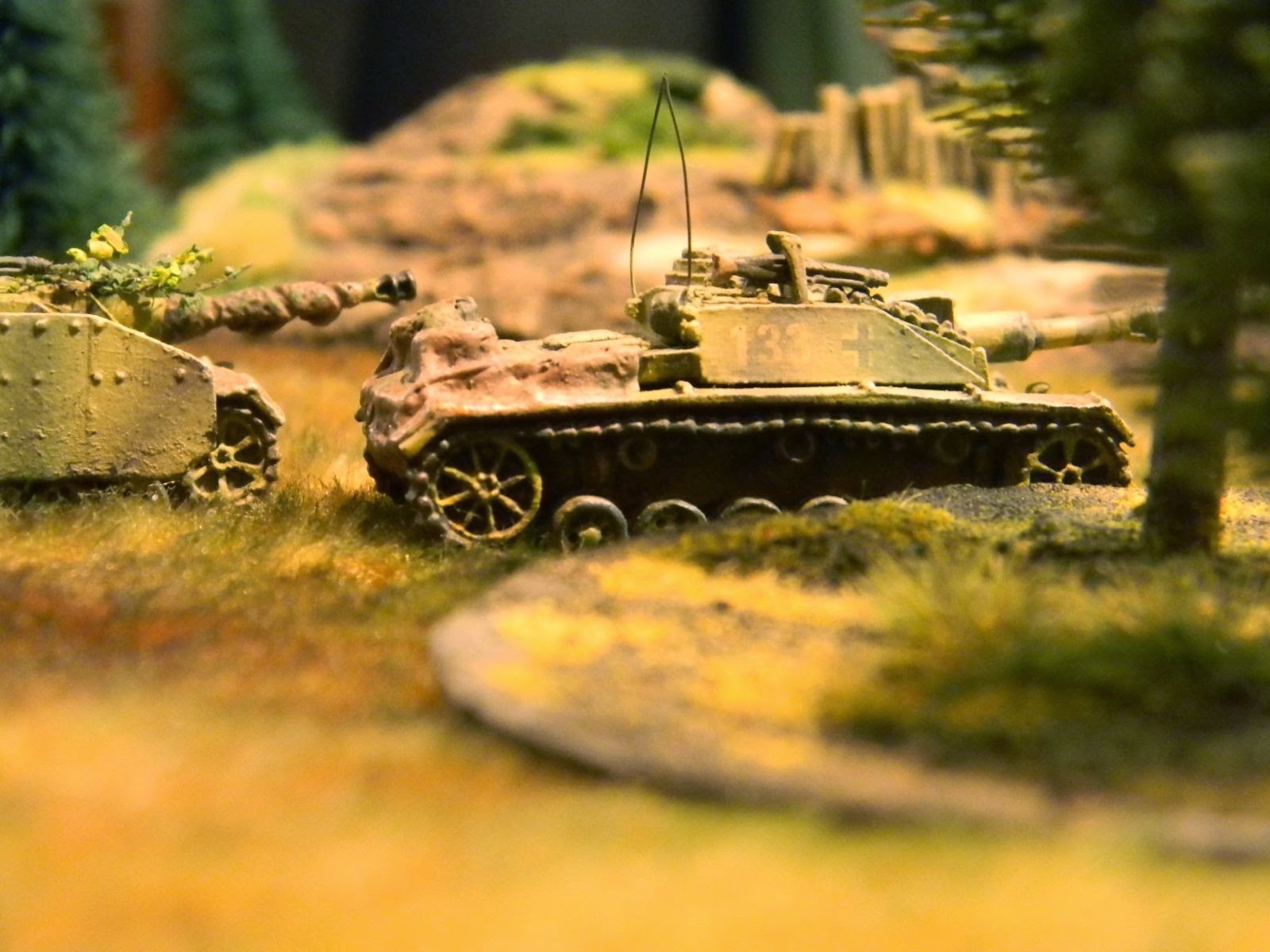 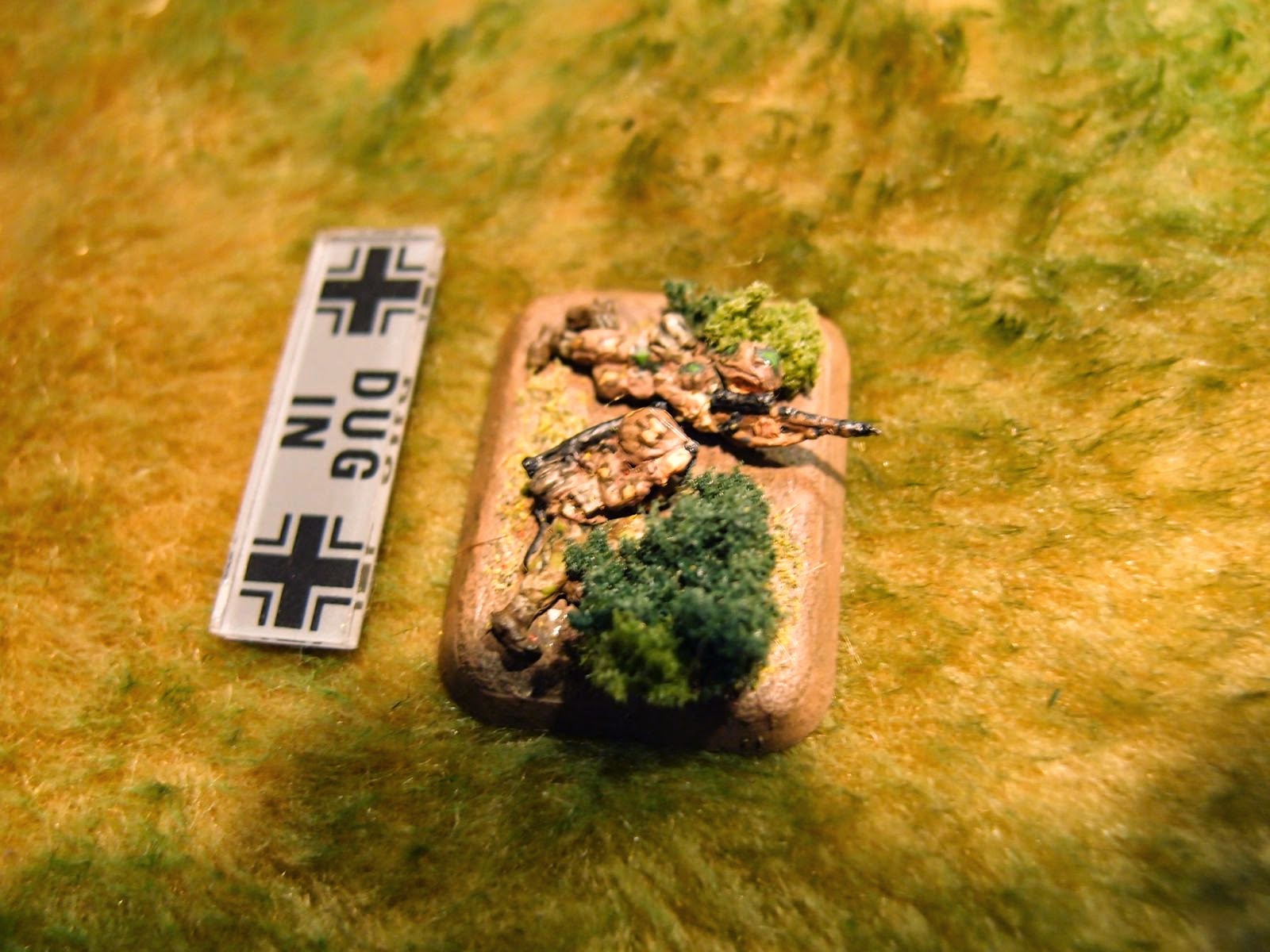 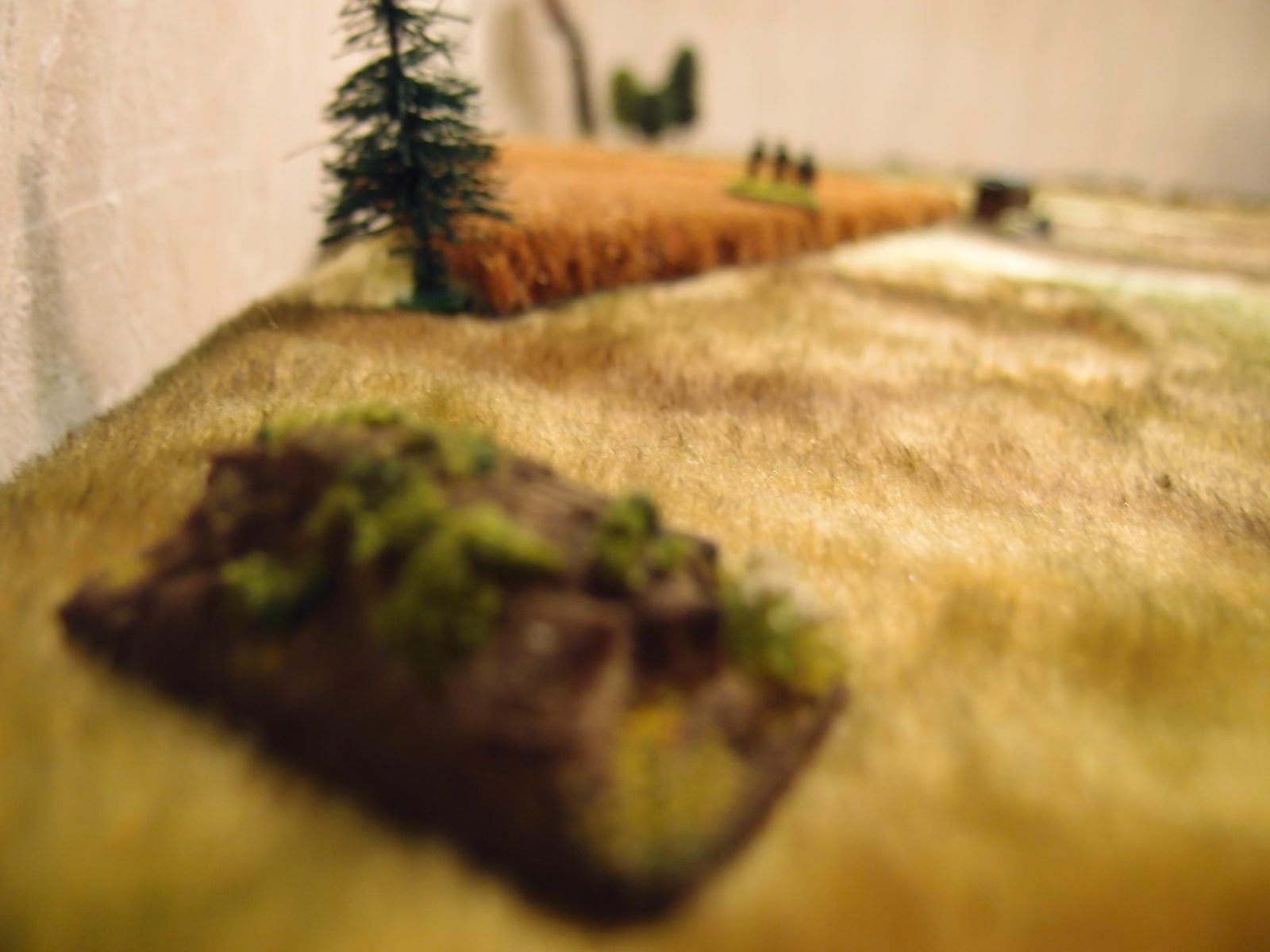 A special surprise for incoming enemy...

Kondziu: My roster was very straightforward: the 1st Infantry Division was a little underequipped and operated in this battle with very limited support, so I used an entire infantry company armed with rifles, added a couple of Maxim machine guns, a DShK machine gun. Mirek found information about there being 76mm and 45mm guns present, so I took one of each, and also an AT rifle for good measure. The crossing of the river was aided by Soviet engineers, so I took a team of those, armed with demolition charges, to help me get through any difficult fortifications or immobilized Stugs (you never know your luck). The assault was preceded by a rather ineffective artillery barrage, so I took a Katyusha fire mission for verisimilitude. Also, since the reconnaissance was not effective, I added a single infantry recon team to the force (but really, the entire attack was a reconnaissance of sorts). Finally, the tank support which arrived after a couple of hours of fighting would be represented by two T-34/76 model 1943 tanks from the 1st Tank Regiment of the LWP. Notably, I refused to use any logistical support, since the division was notoriously under-supplied during the battle.

Deployment: To aid the historical realism, I lacked any type of experience commanding this type of force, i.e., one with plenty of infantry and little tank support. So, like the actual historical commanders, I was sure to prove incompetent and lead them to slaughter. I did have a battle plan, which consisted of overwhelming a reasonably narrow part of the line of defense and then moving up along it. To this end, I bunched up my infantry to the South (the Northern sector was mined) and planned to go forward, pin as much of the enemy as possible, and use my Ura! moves to get as far along on as few orders as possible. The problem was that the battlefield between the river and hill 215.5 was practically bare, with the exception of a few trees here and there, so I braced myself for heavy casualties.

Kondziu: The disappointing turn of event in turn one was that my artillery barrage that was supposed to pin down some enemy forces, was countered by enemy counter-battery fire, so I'd be advancing under fire all the way. The greater part of the game from my point of view consisted of slowly advancing, while part of my units gave supporting fire to try and pin some of the enemy. This was hugely hampered by the fact that what seemed like half my units were pinned at any one time. The fact that I was in the open and the enemy was waiting in at least soft cover was also not helping. The most helpful units at this point were the guns. The ZIS-3 gun in particular was pinning units left and right using HE with long ranged shots. 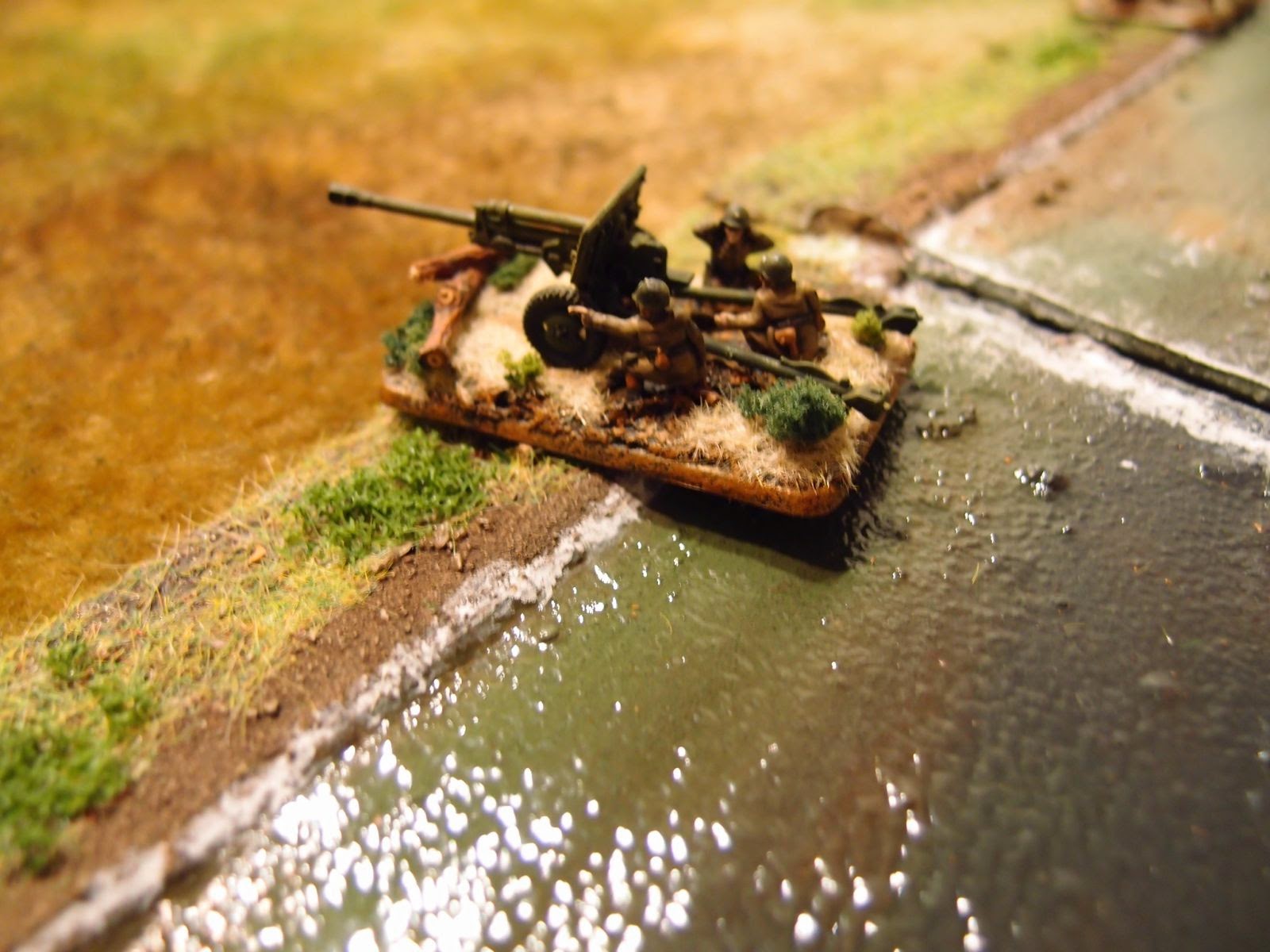 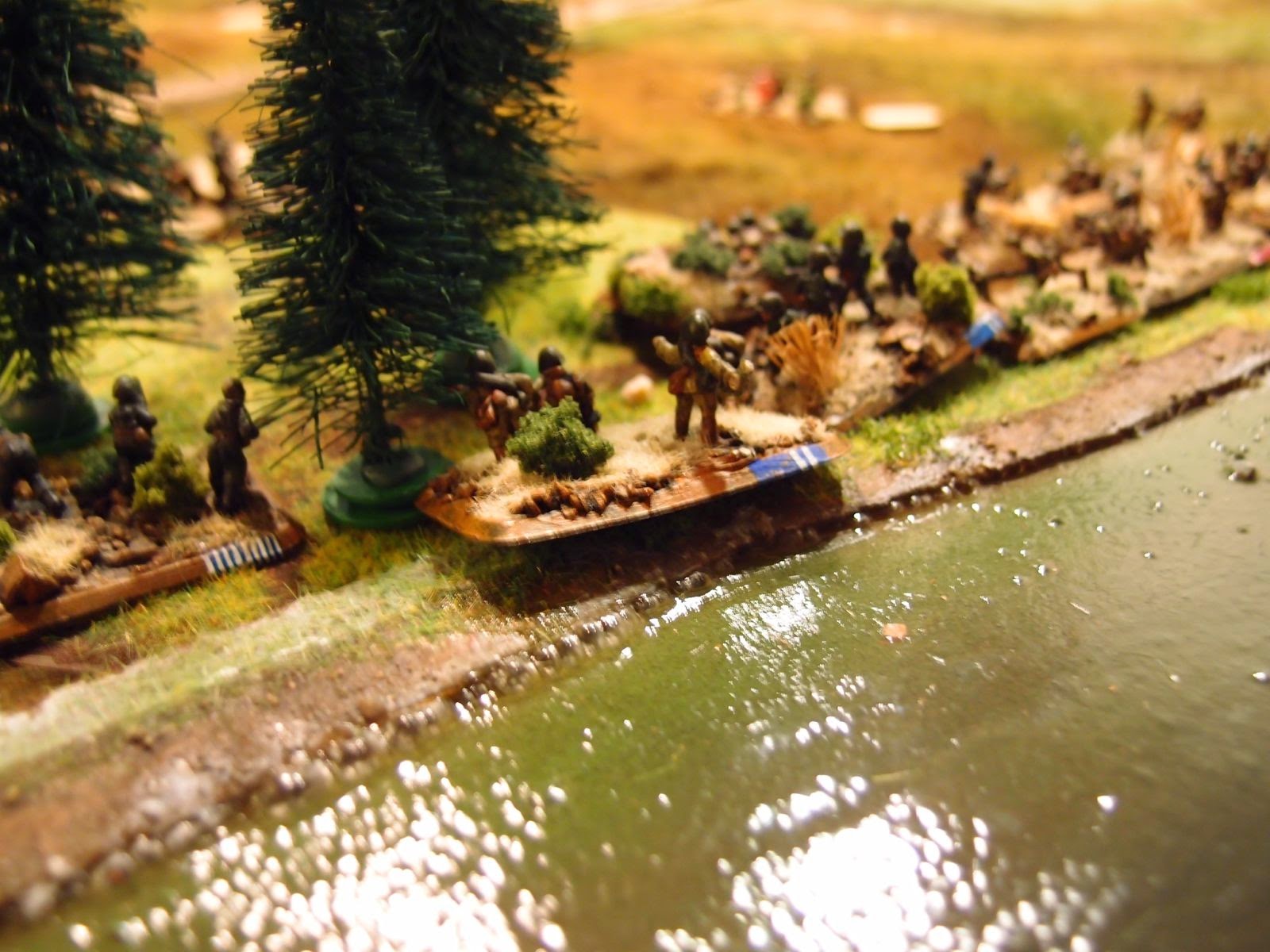 Mirek: From the beginning, it was clear to me that all I can do is try to pin down enemy as much as possible. There was no chance to win the battle by eliminating incoming waves of infantry. I started early on and used all the measures I had to suppress the approaching Poles. Luckily, I was quite successful with that.
Kondziu: I was afraid of getting cut to pieces by artillery, so I tried spreading the units a little, but it did not help a whole bunch, and at one point the 45mm gun was hit by a shell and I was down to one gun. Also, a couple of turns in I noticed that my troops are becoming pinned too fast by coming under fire from too many units. At that point I decided to damn the torpedoes enemy artillery and bunch them up even more, and keep them stuck to the Southernmost edges of the table, where at least some enemy forces did not have range. Still, the attack was visibly getting bogged down just about half way from the river to the first enemy positions and it was clear, that I needed my reserves to move forward.
Mirek: I was extremely pleased that I took the battery of 80mm mortars. They did a good job. I was even so lucky that one of the barrages deviated from the spotting point and directly hit the 45mm AT gun blowing it up without mercy.

Kondziu: When reinforcements start arriving, it's time for the big push. As soon as they get up to the position where the first wave got stuck. We are also graced by the arrival of the T-34s. Unfortunately, they have quite a few Stugs to contend with at this point, and not much ammunition to work with. 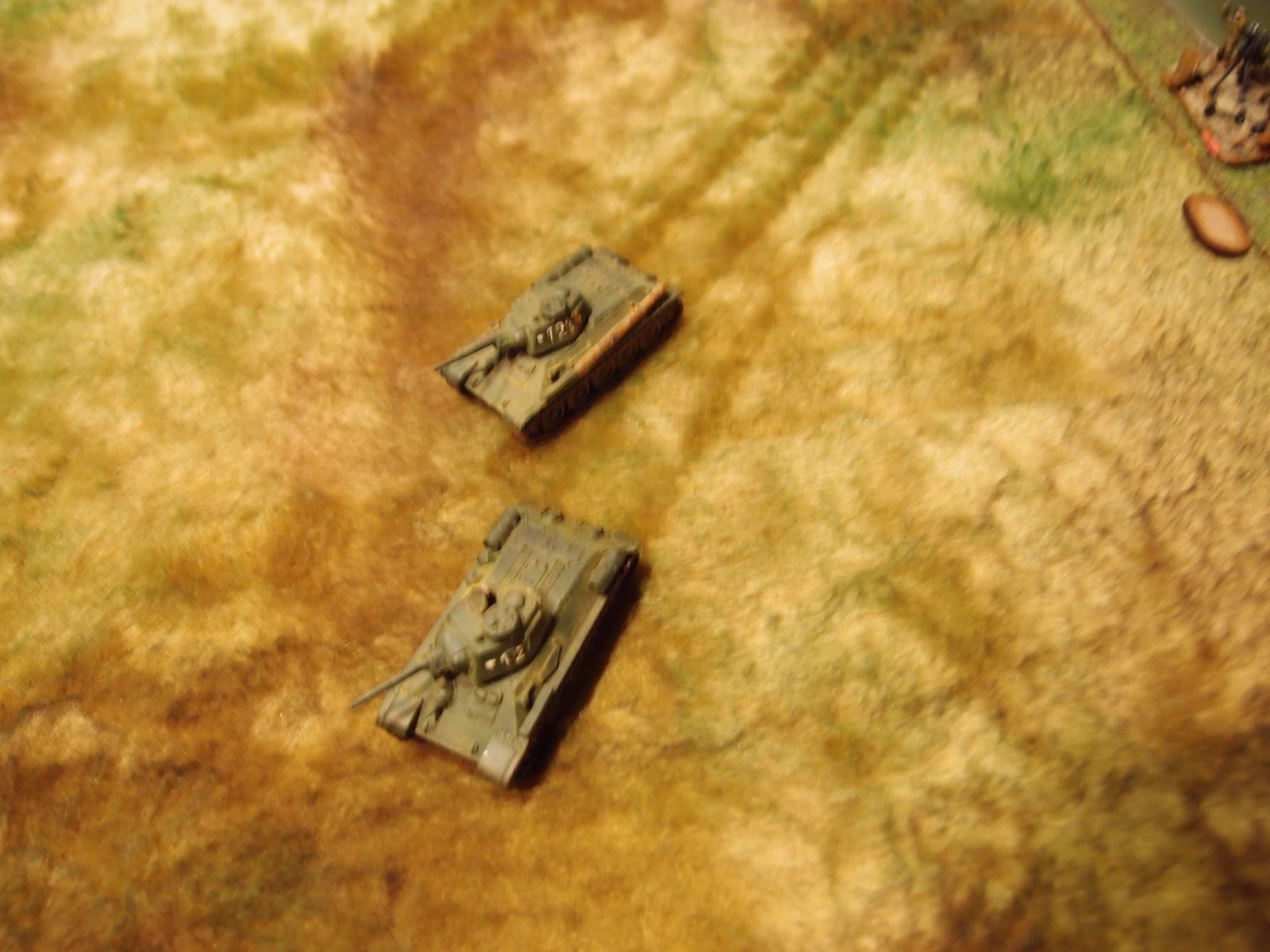 Mirek: The first reinforcements arrived just on time. I was especially waiting for my ammo carrier, because StuH had already run out of ammo. 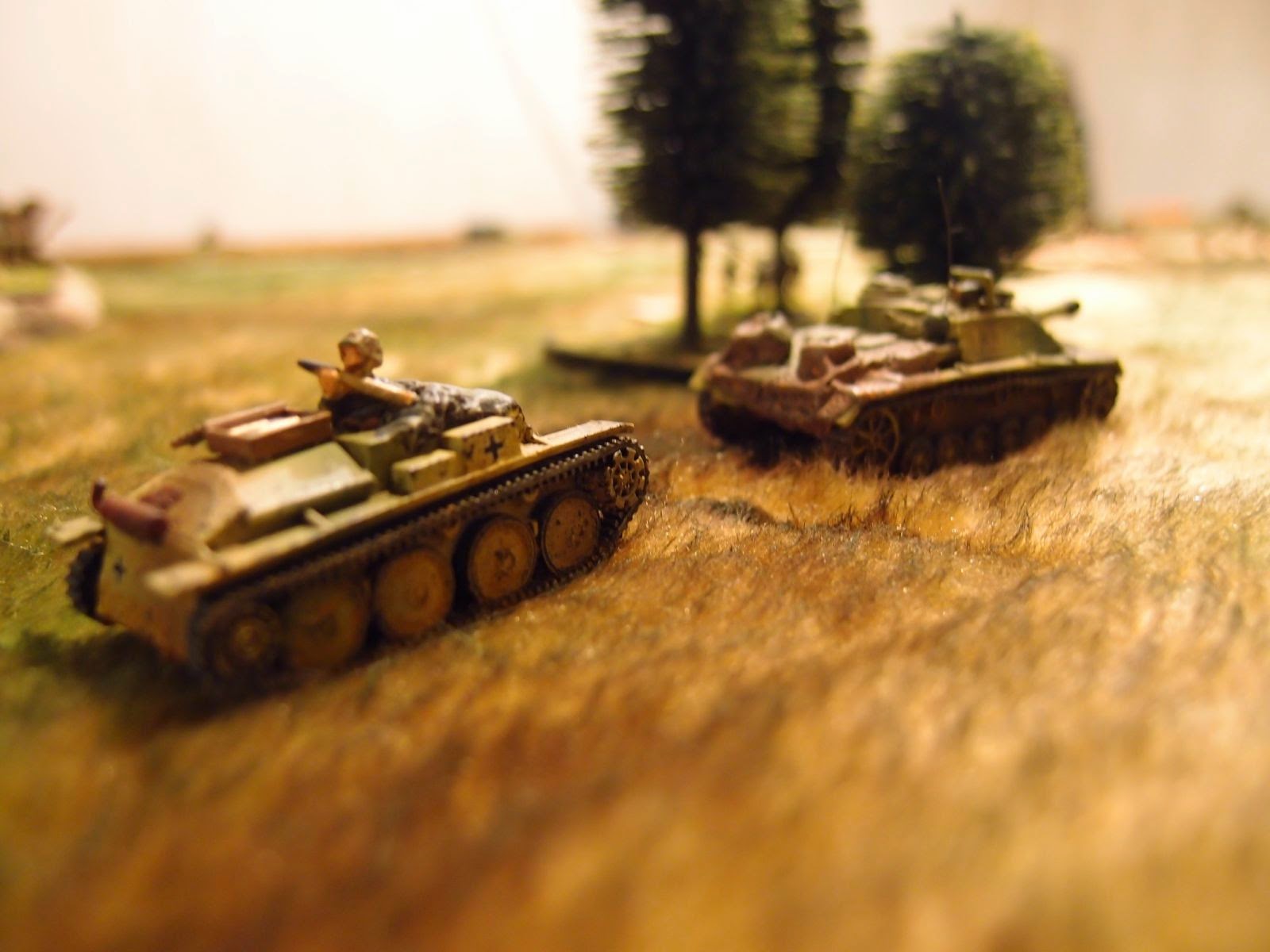 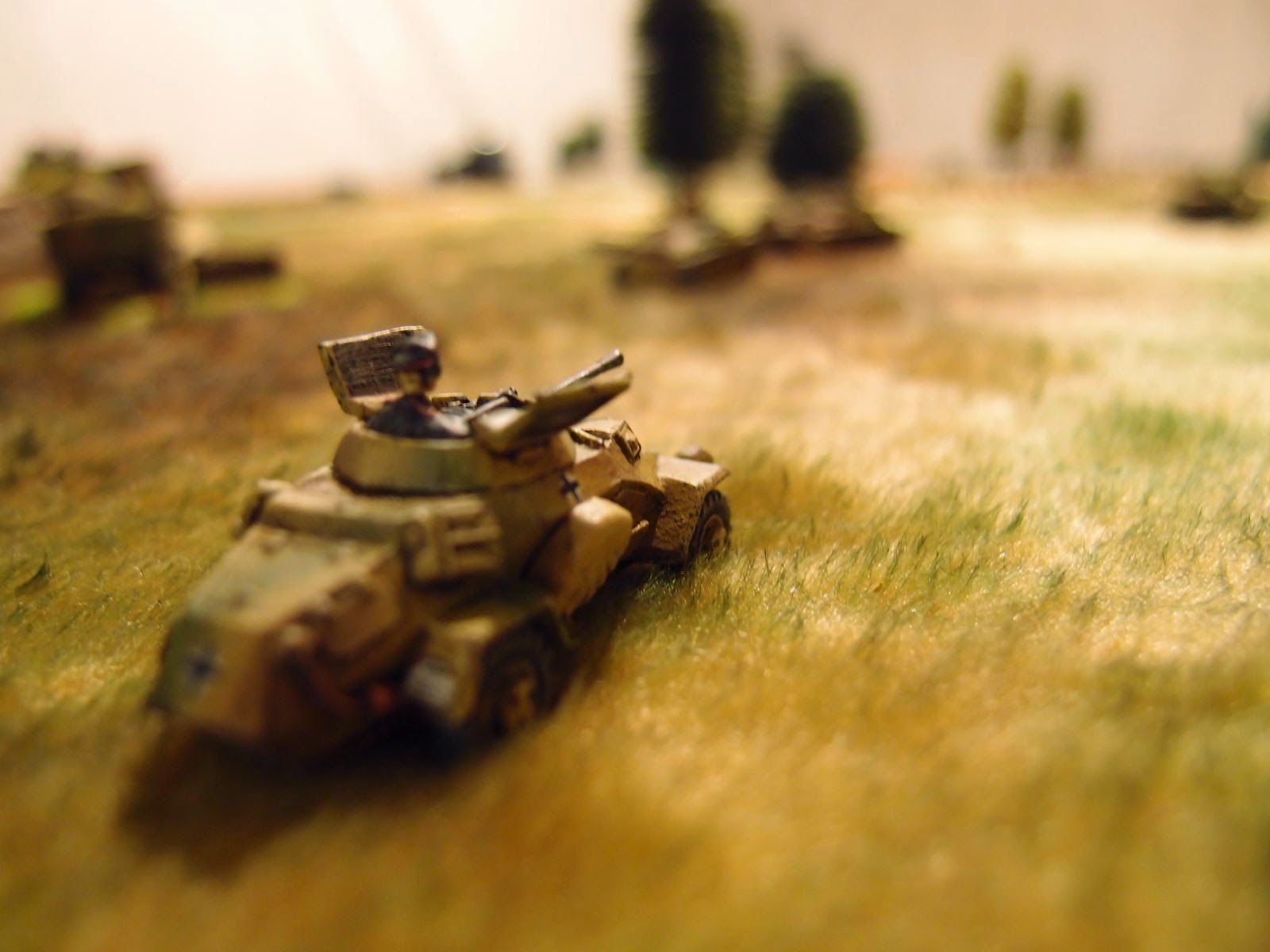 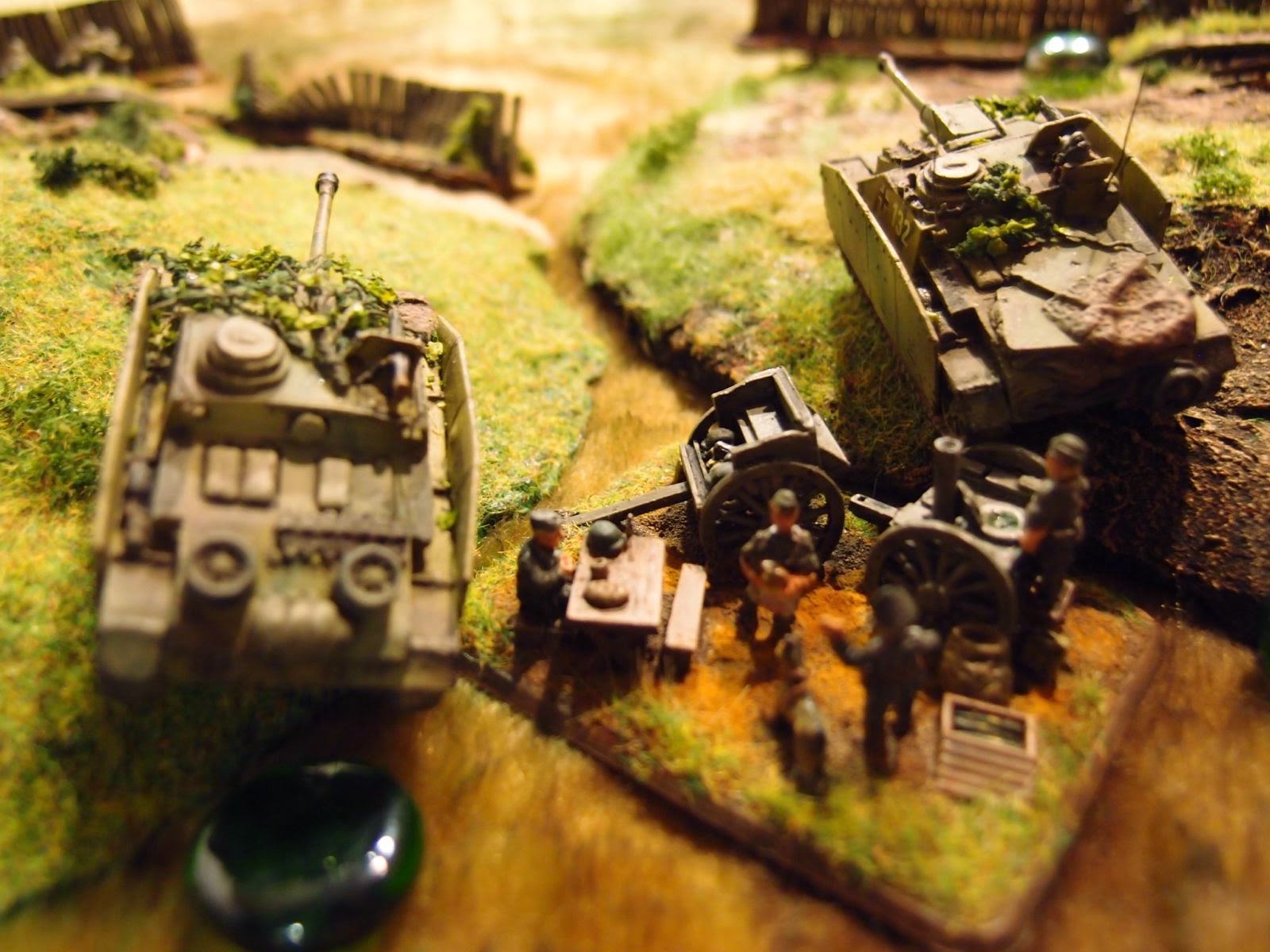 Kondziu: Finally, when the forces rejoin, it's time for them to get stuck in, and with a little luck from the dice gods, the infantry manages to get enough orders to pin some of the enemy and advance quite a long way into the defense perimeter.

Mirek: Unfortunately my StuH suddenly damaged its suspension, just before ammo carrier was able to resupply it. I felt that its fate was already decided as the impressive mass of men was approaching.


Kondziu: The final act. My infantry managed to advance well into the enemy line, and even overtake a Stug that was immobilized by a T-34. However, as soon as they got in range of any enemy team, they got pinned. Because of the laborious advance, my army's battle rating dwindled to dangerously low levels. On the other hand, the enemy reinforcements arrived in strength at the spot where I was conducting my maneuver. So I was stuck at a disadvantageous position, without the ability to unpin most things, with my support in the back, and against a vastly superior enemy force. So I took a risk: I moved up the tanks on Stal! hoping to pin some of the enemy tanks, but also to have my best units again in the thick of things. Unfortunately they ended up much further than I wanted them to be and quickly got popped by Stugs. When the second tank blew up my battle rating ran out, and the attack was stopped.

Mirek: Although I felt pretty comfortable (I still had around 12 BR left), I was also a little bit concerned while looking at the  human-wave that seemed unstoppable. I crossed my fingers hoping that the enemy would soon lose the will to advance...

Kondziu: On the whole an interesting game, by the sheer novelty of the forces we used. However, in retrospect, I fail to see how I could have won it, save for being more lucky. I guess maybe unsupported infantry should not advance across the open steppe against heavily fortified enemy positions unsupported. Who knew! I cannot even convey the feeling of frustrated helplessness I felt, when all my forces kept getting bogged down in the open, far away from enemy positions, and often out of effective range.

Well, I learned my lesson and so did the 1st Infantry Division. Although in their case, they did manage to take and hold the hill. They were no slobs though, and they had a lot to prove, after all.

Mirek: Well, the battle looked quite realistic... I had to admit that Kondziu had a really challenging task there. In my opinion, he performed quite well.
I'm sure that from his perspective it may look like he didn't have a chance to win, but from my perspective it didn't look so bad. I finished the battle with 12 BR or less (I don't remember if I took one more counter). If he only had couple more BR points and was able to reach the hill (he was really close), I'm sure he would be the winner. There were couple of infantry sections defending the hill, which would not be able to defend themselves.
I also lacked the orders. For quite long I wasn't even able to move the StuGs that came from reserves...

Next battle - the assault on Trigubovo... I'm sure he will take revenge... Stay tuned!

If you like to see the whole gallery go here.