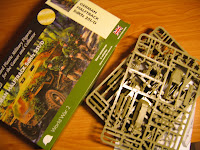 Couple days ago a long awaited (since October) box of SdKfz 251/1D arrived to my kingdom. These were produced by the Plastic Soldier Company (PSC). Actually, PSC released couple of interesting sets of 15mm models that could be a serious alternative to Battlefront miniatures. They are competitive not only if the price is considered but also when one thinks about the quality of casting.

From the beginning I will have to admit that I love the SdKfz 251 models provided by Battlefront. They are really nice. I have seven of them right now. Unfortunately, each half-track costs the same amount of money as a regular tank. This is the main issue if you ask people why they are not collecting mechanized infantry companies. You have to have more than ten of them, and what is the biggest drawback is that in many cases you won't even place them on table (yes they are transports, they count to causalities...).

And here is the spot which PSC found they market target. They are producing models that are used in large numbers by players. They started from realeasing T-34s, Panzer IVs, and infantry sets (Russian and German late-war infantry), and quite quickly started to introduce new models: SdKfz 251/1s C and D, StuGs, Shermans, Panzer IIIs.

Today I will only bring you one photo of the set - mainly to show you that the models seem to be perfectly accurate in comparison with Battle Front if size is considered. They are even historically more accurate than Battlefront's - they have boxes inside which are characteristic for the model 251/1D. In addition, you will get lots of stowage with them, which you can use to enhance your other models (e.g., I will add spare tires to my SdKfz 231s).

Unfortunately, they will have to wait in painting queue to get assembled. I will share photos as soon as they are ready.